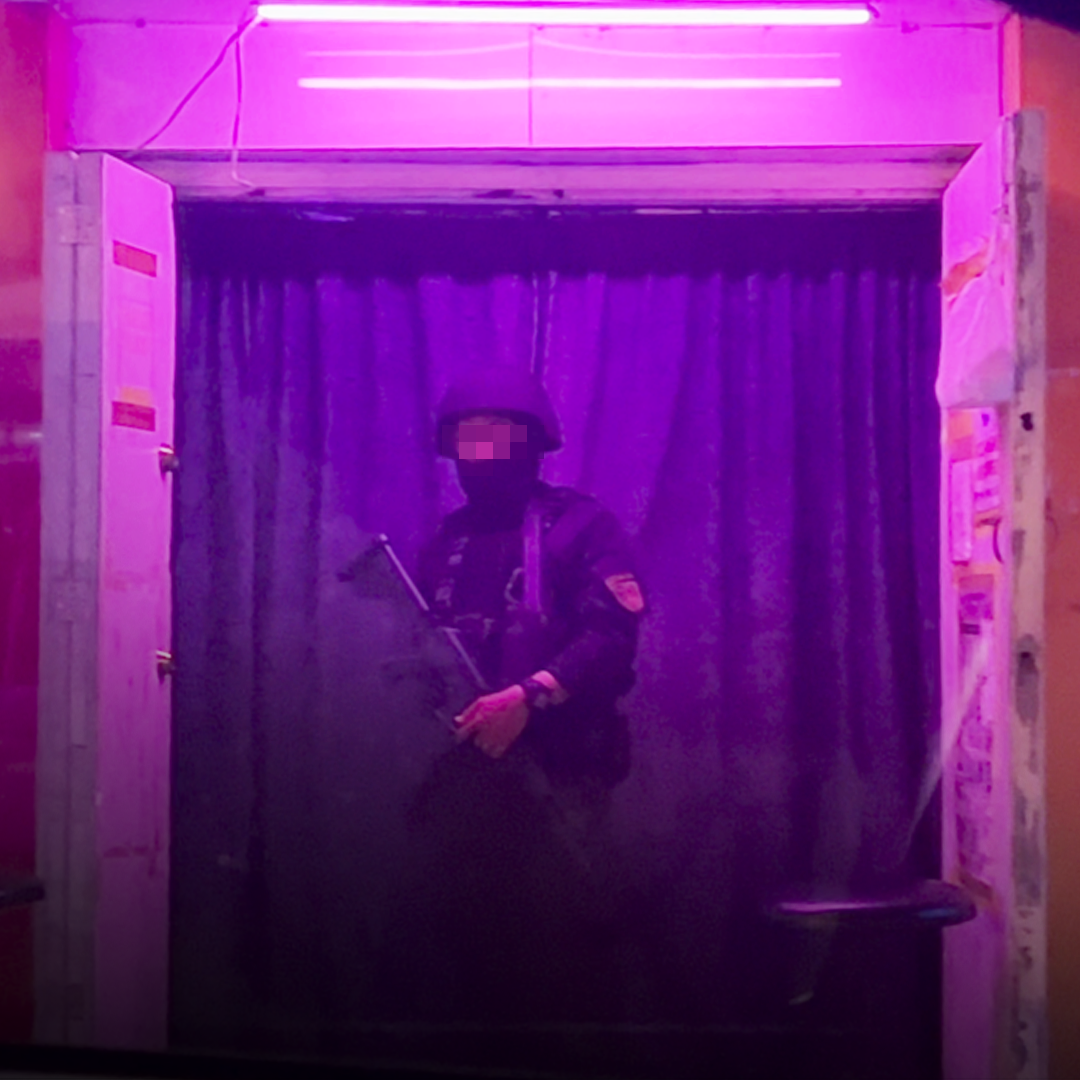 Police stand guard outside of one of two raid locations within the redlight district.

The well-known redlight district was a kaleidoscope of sound and color that twisted around a pair of visitors as they walked down the narrow road.

Bars advertised food and drinks. Casinos teased a chance to win. And everywhere, there were girls. Girls calling to pedestrians. Girls on the curb. And, just inside shadowed doorways, girls making promises about the kind of night passers-by could have if they bought them a drink.

The street has long been notorious — it’s where Westerners go to buy sex from girls. The business of the redlight district is so profitable that most people turn a blind eye to the exploitation that happens there.

The girls were why this particular pair of visitors walked the street that night, but not for the same reasons as many of the tourists around them. These visitors were investigators with The Exodus Road. They’d come to dig beneath the gaudy veneer of the narrow street, to unearth the true stories of dozens of young women.

What they found confirmed the street’s reputation: many of the girls were there against their will. Many of them were young. And many of them saw very little of the money from the men who abused them.

The investigators submitted their evidence to local law enforcement. A few weeks later, the highly skilled team of volunteer investigators back in the United States heard from The Exodus Road’s office in the undisclosed country where they had been working:

“Police followed up on the evidence we provided. They think it matters. They want to raid two of the bars — and they want experienced investigators who can pose as Western tourists. Will you come?”

One of the largest operations in The Exodus Road’s history began to take shape.

The national office spent weeks on the meticulous process of coordinating their team, the U.S. investigators, the local anti-trafficking police unit, and multiple additional government organizations. No margin for error existed. The local team knew how high the stakes were for the women trapped in trafficking.

The stakes were high for local police as well. The unit that works to fight trafficking is underresourced. They were up against powerful local crime syndicates. But these officers are resourceful and courageous, with a passion to defend the vulnerable.

With so many players involved, the risk of security breaches was high. One stray word could result in a tip-off that would end the hope of freedom for these women. 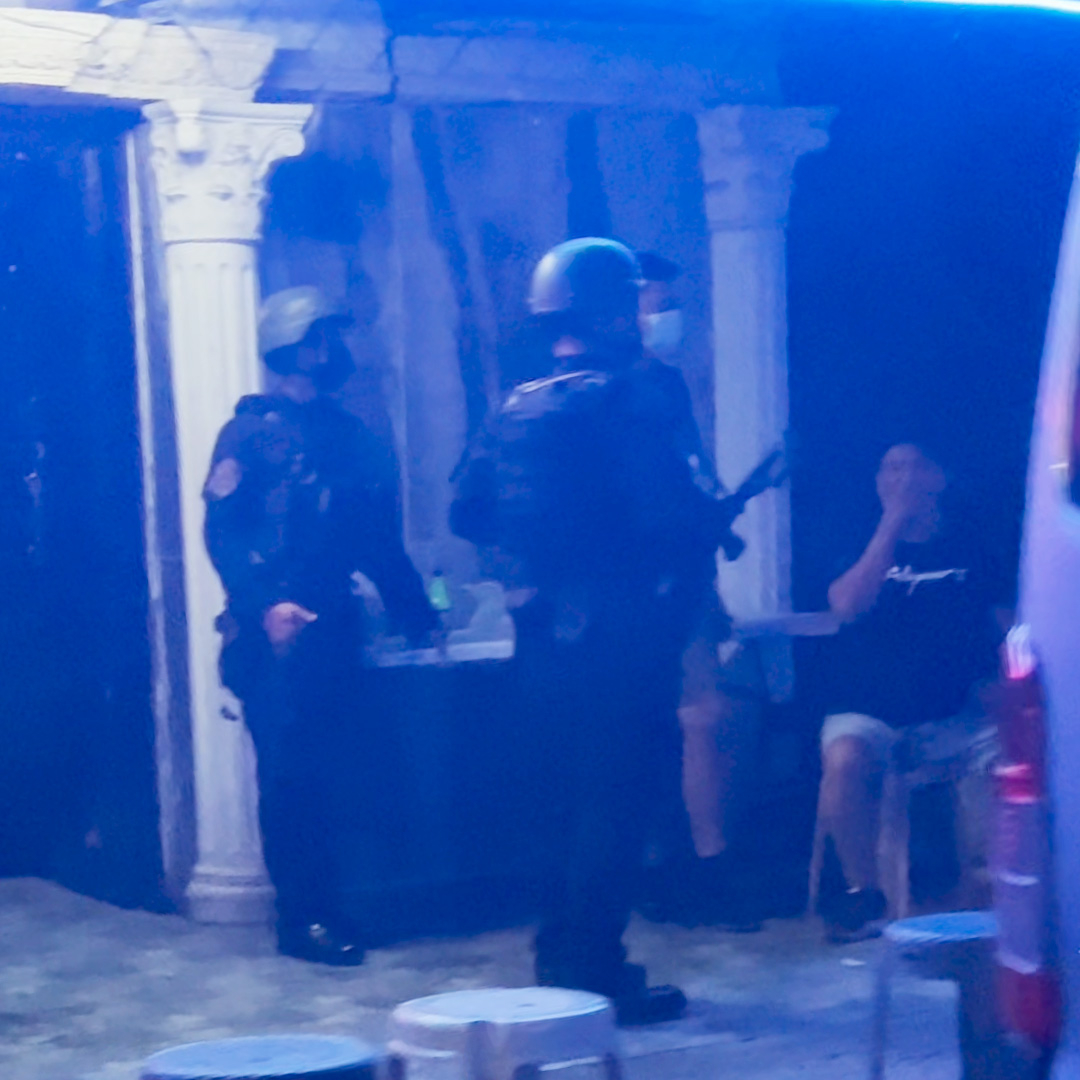 Local police stand outside a second location raided in the redlight district.

The day of the raid started in a stark room in the police station, where The Exodus Road’s country director oversaw comforting essentials being sorted and arranged.

He’d thought about what it would be like when the women reached the police station and had to wait to give a statement about what had been done to them. He thought about how late it would be, how confusing everything could feel. It might not be possible to ease their trauma, but he could soften their waiting with comforting pajamas to replace uncomfortable working clothes and nourishing food to sustain them. He was determined to make sure that in middle of the myriad moving parts of a law enforcement operation, the needs of these women never got lost.

As night fell, The Exodus Road’s investigators and police moved into position. Large vehicles rolled into place, ready to transport survivors. They had reached the point of no turning back.

Two pairs of investigators stepped into the neon haze of the redlight district. They entered the two bars law enforcement had identified as key targets. The investigators bought drinks and negotiated to buy time with the women whose services were being offered. To the traffickers, they seemed like any other customers on any other night.

The first sign that this night was anything but ordinary came when SWAT teams calmly but assertively entered the buildings.

An eerie silence fell over bars that only moments ago had been a riot of thumping music. Bar owners, bouncers, customers, and the young women being sold all froze.

“We’re not here to hurt you,” the female police chief presiding over the raid compassionately declared to the women, who huddled in shock against a wall. “We’re here to help.”

When the buses drove away from the notorious redlight district that night, they carried 39 women who were survivors of sex trafficking. In police cars, 5 traffickers were taken from the street as well.

Each one of those lives changed forever on that night. For the 39 young women, their exploitation was interrupted. They witnessed their rights being advocated for by The Exodus Road and law enforcement. They were offered aftercare resources to support a healing path forward.

The 5 traffickers faced a very different kind of interruption. Bravado had marked their criminal operations. They had sold young women’s virginity at a premium price, pocketing most of the money themselves. This raid was a statement: if they pursue profit from others’ abuse, they will face the consequences.

The arrests rattled more than just the 5 traffickers. The aftershocks sent a resounding echo of freedom down the narrow street.

As frequent visitors walked by the boarded-up windows of the two bars that had been permanently closed, they grumbled that the area would never be the same. And they were right: the street will never be the same.

For girls still forced to work the street while someone else profits, they know now that there are police forces willing to endure the pressure of criminal syndicates and corrupt officials to find survivors of sex trafficking. Freedom is coming.

For traffickers, they know that silence can’t always be bought, that consequences can’t be dodged forever. Justice is coming.

The incredible success that law enforcement and The Exodus Road’s teams are celebrating is possible because of the commitment of our dedicated community of supporters. Thank you for participating in the freedom of these 39 women!