44 men and boys freed from labor trafficking on a cassava plantation in Brazil!

By Mary NikkelOctober 5, 2022No Comments 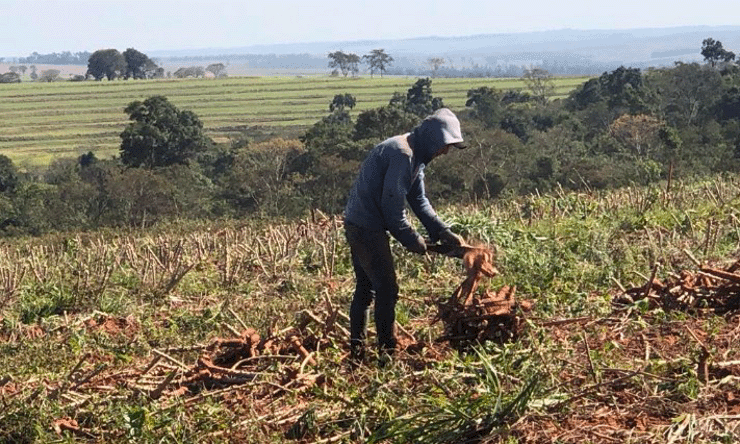 The sprawling cassava plantation was a rich green beneath the bright summer sky.

Humidity blurred the horizon. For a casual observer, the scene might have looked peaceful, even idyllic. But that was not the reality for the workers spread out across the fields.

The men working on the plantation came from a variety of backgrounds, but they had been united by the same hope: the hope of a stable job and a better future.

Many of them were migrants from Paraguay who had left home to pursue the promise of work, only to find that reality was nothing like the promise. Instead of dignity and a viable income, they were forced to work excessive hours on strictly rationed meals. Their wages fell far short of a living. They slept crammed into sheds.

The rural plantation was so remote that the men couldn’t leave. They had no transportation, and the nearest city was far away.

Rumors began to reach state authorities of conditions that matched the definition of modern slavery. They launched an investigation.

Investigating a remote workplace of this scale is complex. Fortunately, law enforcement was equipped with in-depth TraffickWatch training provided to them by The Exodus Road, and with cyber forensics technology contributed in partnership with Cellebrite.

That technology allowed them to investigate tips from anonymous informants. Once they had sufficient evidence for a warrant, law enforcement visited the farm. They found 44 men and teenage boys being held and forced to work in inhumane conditions on the plantation.

Law enforcement removed the labor trafficking survivors from the fields that had become their cage. Interviews with the men hinted at what law enforcement suspected: there may be a criminal network deceiving and coercing vulnerable workers into rural farm work. Their response will be ongoing.

In the meantime, the Brazilian government is providing services and support to the 44 men and boys who were freed. Their freedom is a testament to the power and importance of resourcing law enforcement with training and technology.