Labor Trafficking: All You Need to Know

As is the case with sex trafficking, it is the vulnerable who are targeted for exploitation. People living in poverty, immigrants, or those who have recently relocated are at risk, though the majority are trafficked without moving at all. Deceived by offers of fair pay, desirable jobs, or even just stability, men, women, and children arrive to find that the job agreement has been manipulated, conditions are abusive, and they cannot leave.

24.9 million people are in labor trafficking.

According to the US Department of State, the definition of human trafficking is “the recruitment, harboring, transportation, provision, or obtaining of a person for labor or services, through the use of force, fraud, or coercion for the purpose of subjection to involuntary servitude, peonage, debt bondage, or slavery. A victim need not be physically transported from one location to another for the crime to fall within this definition.”

According to Polaris, “Labor trafficking is the crime of using force, fraud or coercion to induce another individual to work or provide service.”

Read below several stories and researched insights into what labor trafficking looks like globally today. 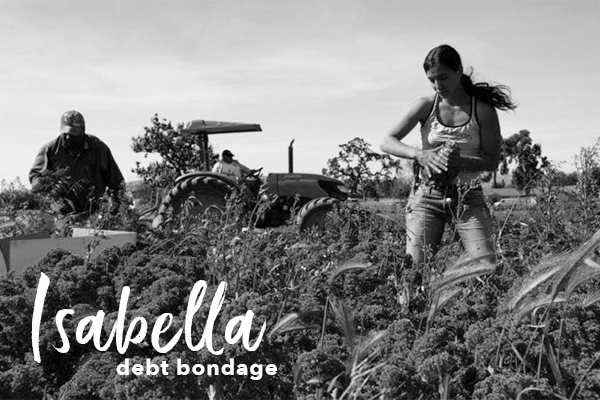 Isabella* grew up in Mexico City. As the daughter of a single mother, she knew extreme poverty at an early age. When she turned 18, she found herself living on the streets when she was approached by a man who offered her a “good job” working on a farm in Texas. He showed her pictures on his phone of the farm, and it looked safe and clean. He let her speak on the phone to someone he promised was another worker at the farm who claimed it was an excellent, well-paying job. It seemed like the perfect opportunity for Isabella, and she immediately said yes.

The man’s agency paid for Isabella’s passport and travel, but when Isabella arrived at the farm in rural Texas, conditions were worse than she expected. She received a third of minimum wage, was not allowed to leave the farm, and was forced to work in the sun for 12-15 hours daily. When she asked to leave, she was told she could not have her passport back until she paid the debt she owed for getting to Texas. According to their paperwork, she owed $2,500 and was told she would have to stay until she worked it off. Isabella was terrified of U.S. authorities and deportation, she spoke very little English, and her mother back in Mexico had no resources to help her. And so Isabella stayed, working off her debt. She was a victim of human trafficking, but she would never know it.

Debt bondage affects half of all victims of forced labor

Debt bondage is the most common manifestation of labor trafficking. People are deceived into accepting jobs, only to find that they are charged an exorbitant amount to cover various sham fees such as recruitment, room and board, and materials. The workers are paid low wages while fees inflate, and the debt owed becomes insurmountable.

Debt bondage can even enslave next generations who continue to work to pay off the money owed by their parents. All the while, traffickers maintain control by intimidating workers with threats and violence, and the “option” of leaving becomes too dangerous. 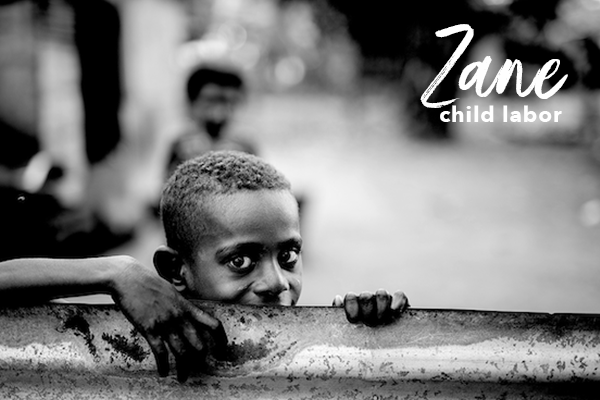 In West Africa, Zane* was 13-years-old when his grandmother died from AIDS. He never knew his father, and his mother had died in childbirth. Zane had two younger siblings, and when his grandmother passed, he took on the responsibility of providing for his sister and brother. He tried to help people in his village in exchange for food, but he gave whatever food he could earn to his siblings. It seemed he always went to sleep hungry.

When Zane heard of a paying job on a cocoa farm about 20 miles away, he decided it might be the answer he had been waiting for. He arranged to have his siblings stay with a neighbor and promised to be back in a few months — with money in his pocket.

When Zane arrived to the jungle farm, he was met by a cruel boss and 40 other teen boys with blank stares. Zane had to sleep in jungle huts, learn to swing a machete high in trees, work grueling 15-hour days, drank from a bucket filled with pond water, and was not allowed to leave the camp. He felt trapped. And exhausted. He got paid every few weeks, but it was barely what he was making back home in his village. He dreamed of his brother and sister every night.

The cocoa and fishing industries have especially high amounts of labor trafficking.

Chocolate, one of the most beloved foods around the world, if not fairly-traded, can trace its roots to the exploitation of adults and children where wages are extremely low, conditions are hazardous, and hours are long.

Studies by the Global Slavery Index have found labor trafficking in cocoa agriculture particularly rampant in Ghana and Côte d’Ivoire — two of the world’s biggest cocoa producers where both adults and children are enslaved in forced labor. Cocoa farmers live in chronic poverty, earning well below the extreme poverty line of $1.25 USD each day. They also have little bargaining power with the instability of cocoa prices on the world market, another factor that drives low labor costs.

Issues of low quality or a lack of education and skills also feed into this wheel of cyclical poverty, where farmers, laborers and their work remain unregulated. Due to the inaccessibility, or unreliability, of police forces in these areas, the absence of abuse reports and prosecution allows slave labor to exist unchecked.

Thanks to investigative journalism and much research, there is now also a world spotlight on labor trafficking commonly found in the global fishing industry. The global demand for fresh catch is high, but fair practices are hard to regulate in the expanse of the ocean.

The Global Slavery Index found the following countries deemed “high-risk” for slave labor in the fishing industry based on six risk factors: China, Japan, Russia, Spain, South Korea, Taiwan, and Thailand. Of these, Spain has not had any reported abuse but remains high risk. Those risk factors include fishing outside of national waters, which are subject to fewer regulations; and high levels of vessel and fuel subsidies from each government, which discourages competition and encourages lower prices. It all adds up to a demand for cheap labor, and the remote nature of the fishing industry makes holding people against their will easy to accomplish.

A simple internet search will quickly list reported stories of extreme violence and even murder on fishing vessels. Men and boys sign on with aims to provide for their families, and find themselves in situations where the fishing captains evade regulations, steal their documentation, and enforce horrific working conditions onboard. Those who resist may literally come to their end at sea. 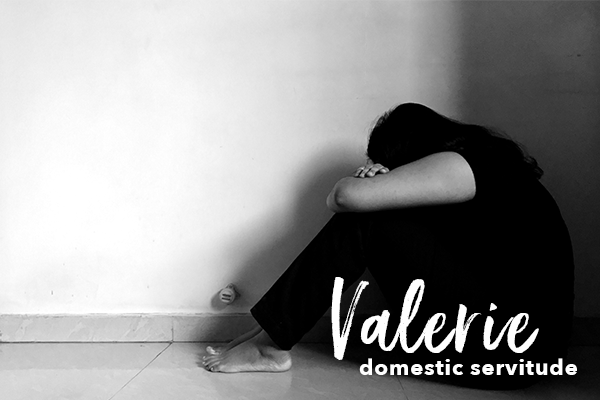 Valerie* had to drop out of school when she was 16. Growing up in the Uzbekistan, she knew what it meant to go without meals, without new clothes, without a safe place to sleep. When she saw an advertisement online for a nanny position in Russia, she felt she had won the lottery. With hope that perhaps this was her ticket out, she completed the online application at a free computer cafe. She received an immediate response; she was selected for the job!

She traveled by bus and train for three days, and when she finally met her new family in Russia, she was excited. They had a large house in a fairly affluent neighborhood and only two elementary-aged children. Valerie quickly learned, however, that nice houses from the street do not often mean nice houses from the inside. Valerie was forced to sleep in the basement in a small closet, given little food, and was expected to clean and cook, without breaks, from when she woke to when she went to sleep. The family had taken her visa and said they would report her to the police if she tried to leave. Valerie never received a paycheck; the family said her paycheck was letting her live in their home and eat one meal a day. This was not at all what Valerie agreed to, but she had no idea how to leave or who to ask for help.

16 million people are exploited in the private sector, including domestic work, construction or agriculture.

Beyond the major industries of cocoa and fishing, other types of labor trafficking can be found in domestic work such as housekeeping and live-in nannying where employees reside in their place of work. Though conditions might not be as dangerous as a fishing vessel, domestic labor trafficking can be just as restricting when it comes to the lack of personal freedom, low pay, and various forms of abuse.

In factories such as the brick kilns in Asia, construction, mining and other industries that require manual labor, adults and children are enslaved in hazardous environments without pay, as well. Farming can be a problematic sector as well when wages are withheld, personal documents are taken, the workplace is dangerous and laborers suffer inhumane living conditions.

A report by Verité shows that more food is produced on the backs of slaves than is commonly known. Melons grown in Mexico using child labor and sold largely to the USA is an example that demonstrates that the market will continue to fuel the demand for cheap labor unless buyers demand foods with a fair trade footprint.

You can help end labor trafficking.

While labor trafficking is a major issue in our world today, you do have a part to play in helping people like Isabella, Zane, and Valerie. One direct way you can impact change is through leveraging your buying power to support a market for fairly traded goods, services, and food. Consider the following practical action steps to make an impact, right where you are.

Research the companies you love.

If companies are implementing ethical practices, they will tell you about it. If they don’t, reach out to them to find out more information and share your concern (with them or others).

While you are shopping, if you see two options of the same product and one is fair trade, choose the fair trade option.

Commit to only buying fair trade chocolate or coffee.

A simple change is choosing to purchase only certified fair trade in one of these household staples.

Research, give, and advocate.

Spend time finding and then supporting organizations that are strategically fighting human trafficking.

Together we can stem the demand for forced labor by wielding our purchasing power, educating ourselves about businesses that practice fair trade, and by supporting organizations who are fighting for survivors of human trafficking like Isabella, Zane, and Valerie. Their stories, and their futures, are definitely worth fighting for.

*The stories of Isabella, Zane, and Valerie are fictional representations of typical labor trafficking realities.

For more content and resources like this, sign up for our newsletter with stories of rescue, human trafficking news, and helpful resources to fight modern slavery.