By The Anti-Human Trafficking Intelligence Cell of Mercyhurst UniversitySeptember 22, 2021June 6th, 2022No Comments

According to the Global Slavery Index, the estimated number of Colombians living in modern slavery is 131,000, or 2.73 out of every 1,000 persons. But confirmed numbers are hard to come by. While the actual number of domestic human trafficking victims in Colombia is unknown, the Colombian government identified 124 victims in 2017, an annual increase from 68 victims in 2016.

Colombia currently ranks among Tier 1 countries according to the U.S. Department of State, which means they meet the minimum standards to eliminate human trafficking in the country. However, the implementation of policies is often inadequate, and human trafficking remains a serious problem.

Types of Human Trafficking in Colombia.

In Colombia, sex trafficking takes place both in-person — in places such as brothels, hotels, and private homes — and online. In cases of online exploitation, traffickers recruit vulnerable women and girls into “webcam modeling.” In some of these cases, traffickers drug victims and/or use debt- and extortion-based coercion to force victims to perform live sexual acts.

As is common regardless of location, human trafficking in Colombia takes advantage of disadvantaged and impoverished men, women, and children seeking better opportunities. In Colombia, people internally displaced because of instability are also vulnerable to human trafficking.

Women are the overwhelming majority of adult victims in Colombia. Based on a 2018 count, 80% of the victims of human trafficking in Colombia were poorly educated, lower-income women looking for employment. In 2019, Colombian authorities identified 124 victims of trafficking, of whom 110 were adults, 109 were female, and 15 were male. Men, when trafficked, tend to become involved in forced labor or domestic services. From 2013 to 2019, roughly 90% of victims identified in Colombia were adults.

However, children can be victims too. The U.S. Department of State found that the forced recruitment of children by illegal armed groups and criminal organizations remained a significant concern in their 2020 report on Colombia. There are also reports of child sex trafficking in the tourism sector, especially in the coastal cities of Colombia.

The spike in Venezuelan migrants is also connected to a 23% increase in identified trafficking victims from 2015 to 2019 and a 20% increase in foreign national victims of trafficking in the first four months of 2020.

Illegal armed groups will also target indigenous and Afro-Colombian youth in Colombia. These victims will sometimes serve as combatants and informants, harvest illegal crops, or be exploited for sex.

Colombia is both a source nation for people being trafficked internationally, as well as being a destination.

Transnationally, traffickers transport victims primarily to Europe and Asia. Transport to the United States occurs regularly as well. Approximately 35,000 Colombians illegally migrate each year, of which 90% are victims of exploitation.

According to the Office of Justice Programs, Colombian traffickers transport individuals through Panama, Costa Rica, Nicaragua, Honduras, El Salvador, Guatemala, and Mexico to enter the United States. Some traffickers bypass some of these countries by sending people by boat to Central America. However, most Colombian women are trafficked to Spain, Japan, Hong Kong, Panama, Chile, Ecuador, and Turkey.

According to the same report, in 2019, Turkey accounted for nearly 55% of transnational cases. All these victims were from one department in Colombia, Valle de Cauca, a department in southwest Colombia on the Atlantic coast. Traffickers typically lured economically disadvantaged victims with fraudulent employment opportunities. The vast majority, 84%, were trafficked into sex work, while 13% percent were in forced labor, and 3% in forced marriage.

Domestically, Colombian victims of human trafficking can be identified in 182 municipalities within the country. Some of the most vulnerable cities are Choco, Norte de Santander, Cordoba, Nariño, Cauca, and Cartagena. Of domestic trafficking, 38% of victims were from Bogotá and Antioquia, and 44% of domestic cases were in Bogotá.

The sex trafficking of Colombian women and children is especially prevalent in areas with tourism and large extractive industries, such as mining. In Cartagena, a popular tourist destination on the Caribbean coast of Colombia, human trafficking and sexual exploitation of minors is a constant issue.

A Venezuelan refugee family asks for money on the street.

Most vulnerable cities in Colombia

Colombian victims of human trafficking can be identified in 182 municipalities within the country. 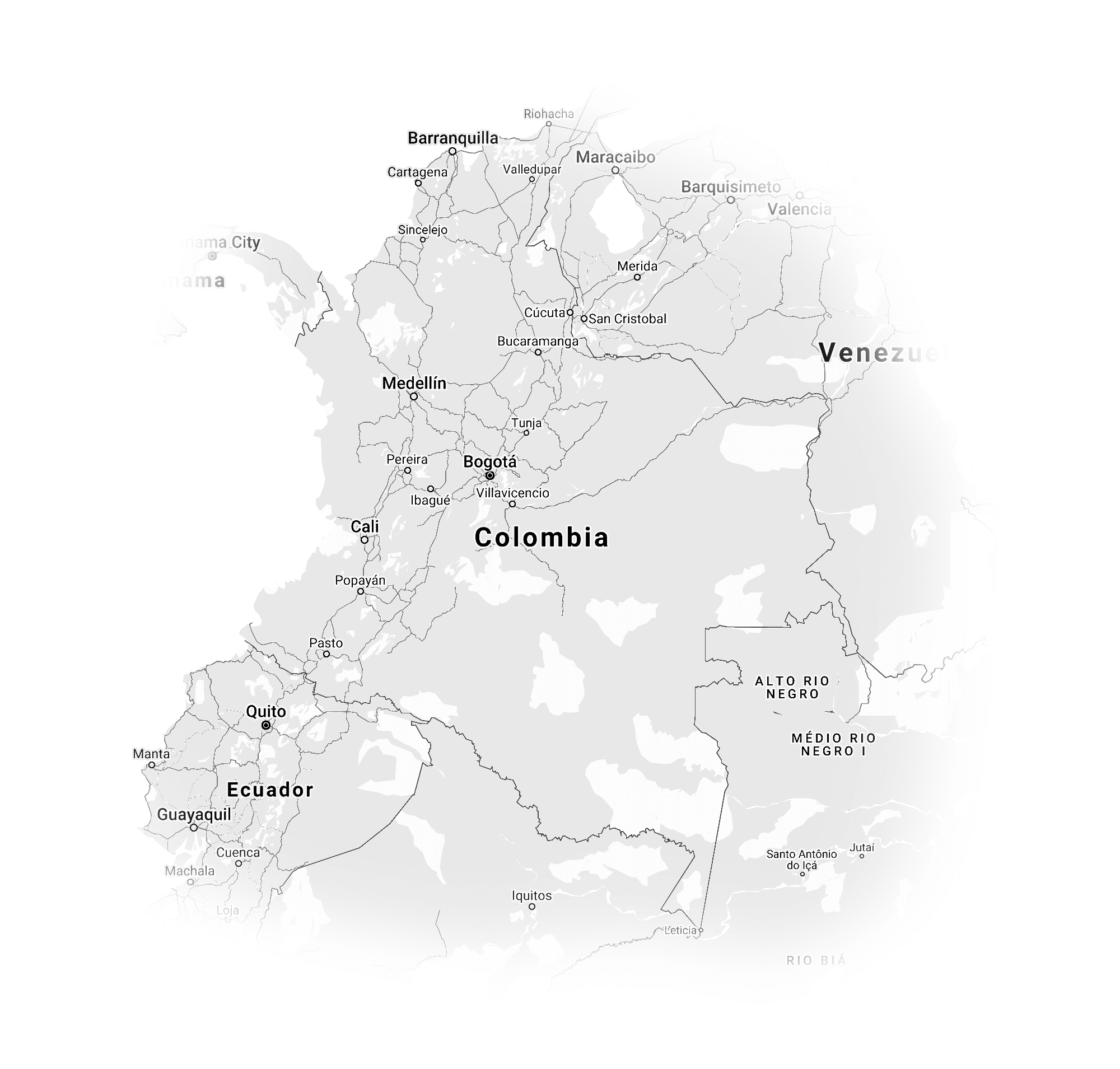 Most sex traffickers in Colombia recruit victims through structured means, such as false promises of employment and through schools and modeling academies. Traffickers also recruit through less-structured means, namely public areas such as bars and clubs and through social media and messaging services (primarily WhatsApp). Most female victims are lured in with the promise of economic gain through modeling. Traffickers will also offer employment as waitresses, saleswomen, and nannies.

Labor traffickers use similar means to recruit and trap victims into indentured servitude. Traffickers also seek to take advantage of Venezuelan migrants fleeing violence and instability in their own country by promising employment.

Traffickers entice victims by offering to arrange for their passports and visas. Other forms of control occur through kidnapping, blackmail, deception, and abuse of power. Traffickers further control victims by remaining with them at all times, controlling their expenditures, time, and transportation, handling visa renewals, and establishing operating rules. They also confiscate victims’ identification documents in order to control their movement.

Victims of trafficking are also controlled through debts imposed by their traffickers. In one case, Colombian police broke up an accused sex trafficking ring that was forcing Colombian women into prostitution in China. The seven accused traffickers exploited 30 young, impoverished, and unemployed women by recruiting them on social media and WhatsApp with job offers for modeling in China. They staged fake photoshoots in Colombia, sent the women abroad, held them against their will, and took their personal documents away from them. They flew them through Madrid and Amsterdam before landing in Beijing. After they arrived, the traffickers imposed $14,000 debts on them and forced them to pay it off by making $600 dollars a day in sex work.

When it comes to children, traffickers often focus on building relationships. Traffickers develop a relationship with the child and create a false sense of trust. This process is known as “grooming.” When living in rural and impoverished areas or in difficult circumstances, the hopeful promises of the traffickers often seem like the best solution to the children’s situation. After trust, and sometimes dependence, is established, the traffickers coerce and engage the child in many forms of abuse to keep the child trapped.

A group of young people stand together in a public park in Bogotá, Colombia.

Traffickers in Colombia tend to work in established networks, in both organized crime and illegal armed groups.

As the world’s top cocaine producer and exporter, Colombia is highly vulnerable to drug trafficking. This results in human trafficking networks smuggling migrants into Colombia and exploiting their labor for drug production and illegal gold mining. Proceeds of funds generated by these illegal activities are typically laundered across the world and used to fund local paramilitary groups.

Organized crime groups are also involved in the trafficking of Venezuelan women into Colombia to be forced or coerced into sex work. According to the press release of Colombia’s Attorney General’s Office, “when the women arrived in Colombia, they offered them a place to stay, food and clothing, but they then forced them to participate in prostitution until they could pay the debt they acquired for the papers to cross the border and their room and board. If the women refused, they threatened to deport them or post naked photos of them on social media.”

Organized crime is also involved in illegal mining, a $2.4 billion industry for these syndicates. In Colombia, research uncovered numerous instances of labor trafficking and exploitation, sex trafficking, and child labor in mining.

Armed military groups such as the Revolutionary Armed Forces of Colombia (FARC) patrol and occupy many of the low-income areas of Colombia identified as hotspots for human trafficking. They target indigenous and Afro-Colombian youth in Colombia and then exploit them as combatants, informants, sex workers, and agricultural workers.

Human trafficking in Colombia and the COVID-19 pandemic.

Due to the COVID-19 pandemic, many borders closed, making it difficult for traffickers to move victims to other countries. On the other hand, many more people became vulnerable to human trafficking because of economic disadvantages caused by COVID-19. Since the pandemic started, trafficking increased 20 percent compared to previous years.

The pandemic also increased the isolation of victims. Because many nightclubs and red-light districts closed due to the pandemic, victims are likely to be shifted into underground operations. Online human trafficking and exploitation have also likely risen due to COVID-19. The demand for webcam services has increased by 30% as the virtual sex industry expands.

This report was prepared for The Exodus Road by The Anti-Human Trafficking Intelligence Cell (AHTIC) of Mercyhurst University in 2021.

Education is one of the most powerful weapons in fighting human trafficking.

Take the next step on your journey of learning about human trafficking with the free TraffickWatch Academy course. In just an hour, you’ll be certified in human trafficking awareness and prevention — and better armed to be part of the fight for freedom.