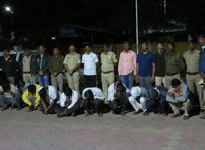 “There’s a town where we’ve heard that women are working in brothels by force. Can you learn the truth?”

Operation Synchronize began when a police chief approached The Exodus Road’s team in India and asked this question. The chief suspected that the brothels were connected to traffickers The Exodus Road had investigated in the past during Operation Perseverance and Operation Resilience.

The tip led our investigators into a bustling, fast-growing town with agricultural roots. As the city’s legal economy grew, so too did the heinous trade of humans. The Exodus Road’s India team uncovered a network of traffickers coercing women into providing sexual services in three different brothels.

The brothels were nondescript on the outside. One of the hotels sat on a corner, advertising its availability in neon shades of blue and red. Another was a motel painted a cheerful yellow both outside and inside. No one could have guessed the suffering that these buildings hosted.

On the inside, they met a Bengali woman who had just arrived in the country. She was anxious, everything about her body language communicating: I don’t want to be here.

As soon as our investigators had every detail law enforcement would need, they delivered the evidence. Four law enforcement teams mobilized in order to raid the three brothels simultaneously.

Because of their speed and efficiency, they were able to arrest 12 traffickers — including a man who had escaped during Operation Perseverance. This delivered a crippling blow to the criminal network.

They also found and freed four of the women who the traffickers had been exploiting, including the Bengali woman they had interviewed and a woman who had just been trafficked to the brothel that day. Social workers sat with the women, comforting them and helping shepherd them into the care of a government aftercare home.

The arrest of 12 traffickers is a victory six months and three cases in the making. This proves what’s possible when The Exodus Road’s team works in tandem with trusted police partners. It’s an accomplishment that we can celebrate because of your commitment to supporting the longterm work of freedom. Thank you!